Getting stranded on flooded freeways was just the first calamity for local drivers. Retrieving their vehicles brings another blow -- towing and storage fees of $500 to $700. 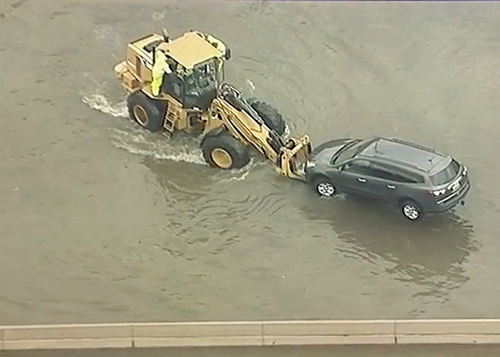 "Drivers across metro Detroit whose vehicles were towed from the freeway after weekend floods say the cost to recover their vehicles is outrageous," Simon Shaykhet says at WXYZ. One person he interviews says: "Really what this is, is exploitation."

Outside Goch & Sons Towing in Southwest Detroit, customers are lined up and fed up over what they call unreasonable prices to pick up their vehicles. Some waited for hours to learn about a hefty price tag they didn't expect. ...

"My car was on the shoulder with no water damage. [It was] $639. Six percent service fee for using a credit card, too," said motorist Kelsey Cinciarelli [of Southgate]. ... "I'm furious."

The firm on Deacon Street, which has a Michigan State Police contract to clear freeway crashes and abandoned vehicles, calls itself "Detroit's largest towing company."

It charges a $30 daily storage fee, including for Sunday when it was closed.

The state police says complaints should go to the Michigan Attorney General's consumer protection office. A statement Tuesday from that agency acknowledges "concern [about] reports of price-gouging by towing companies that have towed cars out of flooded roadways and impounded them." It links to this form to file a district court petition challenging towing and storage fees.

Many drivers were stranded Saturday on I-94 after more than two dozen pumps stopped working due to power outages after heavy rain. Those with comprehensive insurance coverage could recover at least part of towing costs.