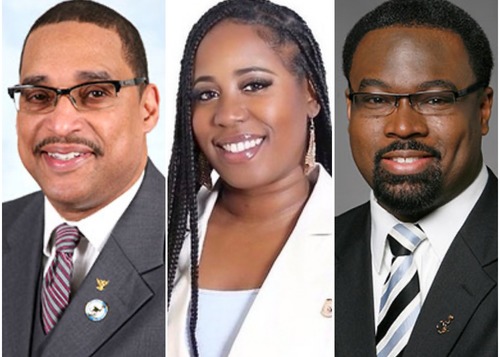 Krystal Larsosa and Councilmember James Tate won the primary election and will be the only candidates on the ballot in the Nov. 2 general.

Detroit voters this year have this chance to tip the balance of power on City Council, with four of nine seats up for grabs on a body that typically votes with Mayor Mike Duggan.

Nearly two dozen council candidates will appear on the primary and November ballots. Primaries will be held in Districts 1, 4, 7 and for two at-large, or citywide, seats. There will be no primary in Districts 2 and 6, where the two candidates in each race will automatically advance to the November ballot. District 5 Councilmember Mary Sheffield and District 3 Councilmember Scott Benson are meanwhile running for re-election unopposed.

The departing councilmembers are Council President Brenda Jones, who holds one of two at-large seats; Raquel Castañeda-López, of District 6; and Andre Spivey, of District 4. Gabe Leland, of District 7, recently resigned before pleading guilty to a felony.

Over the coming weeks, we'll be rolling out survey responses from council hopefuls in races with an Aug. 3 primary. The following are responses from candidates for the District 1 seat occupied by James Tate, who is running for re-election. They are presented in alphabetical order by the last name of the candidate.

Responses are also available for the District 7 and at-large seats.

1) Tell us a little about yourself.

A resident of Rosedale Park for over 20 years, married for over 30 years, father of seven children, and grandfather of 22. A member of Macedonia Baptist Church for over 20 years. A member of Jimmie Lunceford Lodge #45, a Shriner of Marracci Temple #13, and a member of Axemen Professional Fire Fighters Motorcycle Club. I am actively engaged in the community. 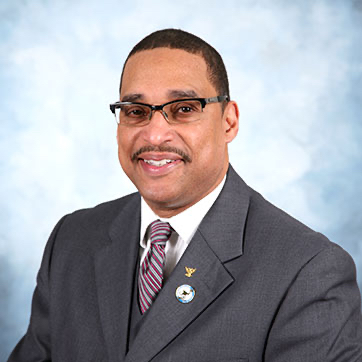 Darryl Brown: "I am actively engaged in the community." (Courtesy photo)

2) What do you see as the primary issues holding back Detroit?

Work with local unions to create apprenticeship opportunities, and create retail and housing development to work on driving down the poverty rate.

4) Why should voters elect you over your opponents?

Because I am committed to this community through my service as the Police Commissioner for District 1, a Detroit firefighter serving the Northwest side of Detroit, the owner of four commercial properties on Grand River, a member of the Rosedale Park Radio Patrol and most of all a dedicated resident.

5) Are there any council decisions with which you've disagreed since 2014? What are those?

6) Are there any mayoral agenda items with which you've disagreed since 2014?

The most recent was approving Facial Recognition technology used by DPD.

1) Tell us a little about yourself.

I have lived in Detroit my entire life. I graduated from Mackenzie High School and completed my criminal justice undergrad at Eastern Michigan University. I am a child- and youth-development professional, having worked in juvenile justice, DPSCD, as well as the church, facilitating safe play and interactive learning. Happily married with three young daughters, I ultimately set my career aside to focus on home and my family's business interests in media. I'm running for Detroit City Council to offer a commonsense perspective as a mom in order to spread the fortune experienced by my family to all the youth and families in District 1 and across the city. 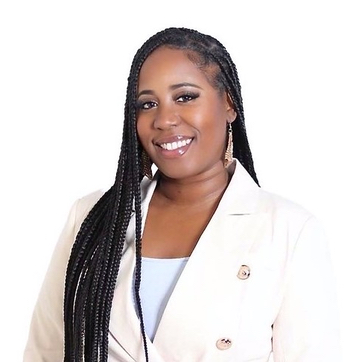 Krystal Larsosa: "I will always listen to the people." (Courtesy photo)

2) What do you see as the primary issues holding back Detroit?

The two main opportunities before Detroit now are for building the generational wealth of our citizens while also introducing a narrative accurately depicting us as a city of leaders, thinkers, hard workers, innovators and the anchors of this region. Big businesses are often celebrated for their contribution to Detroit when in fact we the residents built the businesses through the giving of our land and buildings and in the form of tax breaks and rebates which continue to subsidize jobs and careers for tens of thousands of people who do not live in our city. When youth understand this, they will celebrate themselves through deeper investment into the community. They will also demand greater equity in economic opportunities.

I will introduce funding for community education programs that lift the voices of Detroit youth and embed their input into every level of our governance. I will also champion community benefits agreements promoting racial equity for every business receiving major subsidies.

4) Why should voters elect you over your opponents?

I think Detroit deserves representatives who share their lived experience. I have lived here my entire life looking after my community and its children. Never seeking the limelight. Never pursuing elected office. In fact, I am not politically ambitious and only agreed to run this race when I understood the perspective I could lend as a mom raising three young girls in 48227. Paying too much for water. Watching development happen in some communities while other neighborhoods get skipped. I will never sell out the District or the city. I am asking District 1 to choose me because I will always listen to the people. Always.

5) Are there any council decisions with which you've disagreed since 2014?

What comes to mind most immediately are our slanted membership and lease with GLWA, the lease of Belle Isle (what year was that?), the $75 million dollar threshold for CBOs (we need to be at least $50 million) and the rushed vote of Proposal N (I think more time should have been taken to understand it to be sure we got it right). I also believe generally that when it comes to extending jobs and economic opportunity to Detroiters, we need to go big. Requiring participation of at least 50% of Detroiters is literally a half measure. We should be aiming for close to 100%. This would have been my goal through the most recent recreational marijuana ordinance. Detroiters need to be the primary beneficiaries of programs like these. That is the definition of equity.

6) Are there any mayoral agenda items with which you've disagreed since 2014?

I think the "rain tax" is a travesty. But then, so was Proposal N's original attempt to allow contractors to opt out of hiring Detroiters. And so is the current attempt to keep Proposal P off the ballot. This looks dishearteningly like this voter suppression.
The question is not whether leaders agree with the contents of the proposed new charter. (I happen to think there is some great stuff in there: affordable housing, a strengthened health infrastructure, reparations...) This is about the voters getting to choose for ourselves. With that in mind, perhaps the administration should be educating the public about Proposal P rather than keeping us from voting on it.

1) What do you see as the primary issues holding back Detroit?

Two high-priority issues for the city include gun violence and poverty. 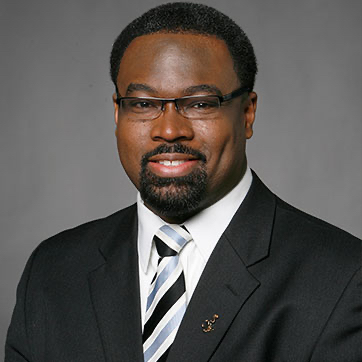 James Tate: "My work is not complete." (Courtesy photo)

2) What steps will you take to address those?

I will continue to collaborate with community-based violence intervention groups who are already doing the terribly difficult work of interrupting the cycle of violence happening in our community. These groups operate on the grassroot level and often have a perspective that government often is not afforded. At the same time, it is important to continue the work with the Detroit Police Department as they are the primary entity charged with crime reduction in the city. The gun violence we are experiencing is an outcome of untreated trauma, lack of trust in government’s ability to protect, and barriers to meaningful economic opportunities. I have also spurred the Detroit Health Department to declare gun violence a public health crisis and the department has since hired an epidemiologist and others to approach the issue from a health perspective and not as simply a law enforcement matter. This work will take some time to bear the fruit we all want to see but is the necessary foundation to help the city implement policy that approaches the issue in a more holistic way.

Ensuring that more Detroiters are lifted out of poverty and barriers removed that prevent certain residents from achieving beyond their current financial condition will remain a priority. This really entails much more than making sure that every Detroiter has a job... these jobs or careers must be in fields that allow for financial and professional growth. Addressing the issue of poverty means also focusing on the psychological concerns, transportation issues, food and utility insecurity that so many Detroiters experience every day. I will continue to support funding of programs that provide job training and placement for employment that provide livable wages and valuable skills. I will also working with the business and philanthropic communities to help the city better fund these programs.

3) Why should people elect you over your opponents?

I remain highly motivated to serve and believe that I can continue to contribute to the financial stability of the city while also meeting this very important moment that demands government make significant changes that redresses the inequities in policy and practice that harm residents.

I have served with integrity, compassion, and thoughtfulness during my tenure in office. The adult use marijuana ordinance that I sponsored highlights my ability to use legislation to fight for Detroiters in a manner that respects everyone but seeks to prioritize residents who stuck out the severe hardships of the city’s past.

My work is not complete. If re-elected some of my top issues include: 1. ensuring that the financial review commission that oversaw and approved City spending is not triggered back alive, 2. continue to identify ways the city can provide resources to help financially, physically, and emotionally stabilize families, and 3. ensure that at least 50% of all adult use marijuana licenses are awarded to long-time (or Legacy) Detroiters.

4) Are there any council decisions with which you've disagreed since 2014? What are those?

Most recently, I disagreed with Council’s decision to move forward with a counter-lawsuit against individuals who were arrested during last year’s protests and voted against the contract for the law firm to represent the City.

5) Are there any mayoral agenda items with which you've disagreed since 2014? What are those?

While I believed that many elements of Proposal N were meritorious, overall, the I did not believe that the proposal that was eventually sent to voters in 2020 provided enough clarity on how the funds would be used once obtained and nor a decisive plan on how the properties that are cleared or rehabbed would be addressed afterwards. That was a huge concern of residents in District 1 and it led me to vote in opposition of placing the item on the ballot.
I also opposed the previous effort to place Proposal N on the ballot a year earlier because the program at that time focused too heavily on demolition and again had no solid policy that outlined proper maintenance nor disposition post demolition. I was not against blight removal/rehab as a priority, but felt that what was presented lacked the transparency needed to build the trust that so many have lost in city government over the years and this is a huge ask of our residents with major implications if not properly executed.