From Ugandan oppression to Detroit freedom: One gay immigrant's story

Things were never great between Alistair Kiyingi and his father, but by 2017, they were getting worse, fast. In Kampala, Uganda, where his family lived, “there are not so many known homosexuals,” and it was becoming increasingly obvious Alistair was one of them. He’d been named and outed in a scurrilous online publication, and arrested a couple of times. 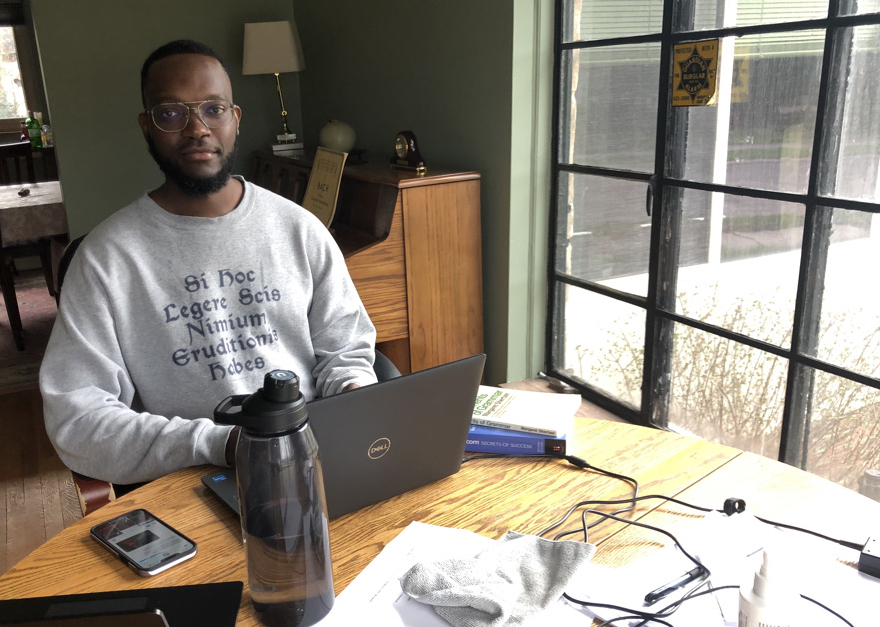 But it wasn’t until his mother suffered a fatal fall that year, which Kiyingi claims was caused by his father, that things reached a crisis point. Kiyingi left the house, stayed with a friend for a couple days, piled up all the cash he could get his hands on, then drove to the airport and bought a one-way ticket to Washington D.C. He had a visa connected to a student program, but beyond that, no plans. He was 21 years old.

Crying on the plane, he spilled his troubles to his seatmate. The man offered a possible solution: He could ask for asylum in the United States. There were places where people would help him. One was in Buffalo, one in Los Angeles, another in Detroit…

And so, not long after he landed in Washington, he booked another flight, and found his way to Freedom House in southwest Detroit.

And now he waits

At Freedom House, he was accepted as an asylum-seeker, and moved into its dormitory-style lodging. His petition was submitted, and there began a long wait for it to be taken up for a ruling. Ironically, the Trump administration’s focus on the southern border kept this young man from a “shithole country” in a legal limbo that worked to his advantage.

“They changed the scheduling (for asylum hearings) to ‘last come, first served,’” Kiyingi said. As the immigrant traffic at the southern border is so much greater than Africans arriving in airports, that meant Kiyingi’s petition went into a holding pattern. It gave him time to find work, doing social media, and later fundraising, for Global Detroit, a nonprofit that advocates for immigration to the U.S.

He freely admits to many advantages, ones not all immigrants have: He’s well-educated, speaks perfect English (it’s the official language of Uganda, a former British protectorate), with the habits and manner of a young man raised in upper-middle-class comfort. And his charming, outgoing personality was a good fit in a country that prizes both.

“He has a wonderful attitude, and became critical to the organization,” said Steve Tobocman, outgoing executive director of Global Detroit. “He definitely held a space in the organization – lovable, funny, (with) a big personality.”

But the whole time his case was pending, he knew a sword was dangling over his head by a thread. His roommate, a lawyer, told him that if he was caught drunk driving or in some other legal matter, “they won’t take you to jail, they’ll take you to the airport.”

In 2020, his petition was formally accepted, meaning the investigation of his case would begin. The pandemic muddied the waters further, but in January of this year, Kiyingi was finally granted permanent asylum. After a year, he can apply for a green card, i.e., permanent residency unrelated to his asylum status.

Today he works for a different nonprofit agency, fundraising full-time. He’s talking about getting his own place, now that he knows he can stay permanently. At 26, the rest of his life can begin.

Despite what you might hear on certain cable news channels, immigration isn’t easy for anyone. Leaving behind your homeland, even when it’s a terrible place, is a step like few others. Crossing a continent, and then an ocean, even with the advantages of language and at least some money, is disorienting to the most grounded souls. To stand in front of a door, not knowing what’s on the other side, and to take a chance to ring the bell – it takes courage.

So welcome Alistair Kiyingi, new almost-American. He likes it here.

“I have no regrets. None,” he said. “I regret my mother dying, leaving my friends. But I’ve built a network here, and I love my new friends, so: No. No regrets.”