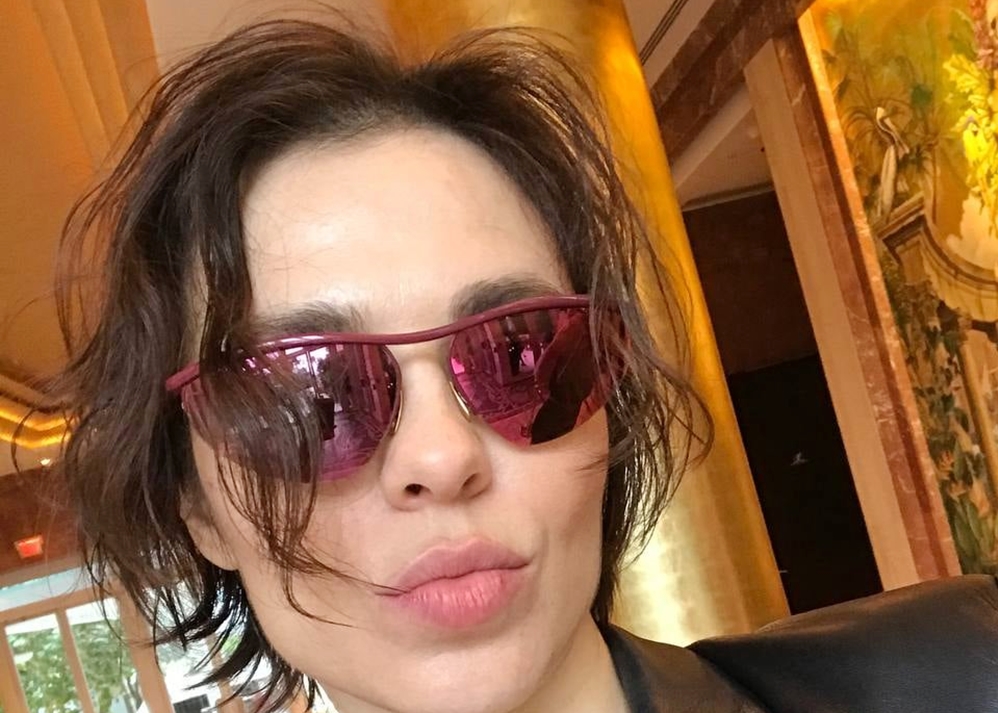 Update, 8 a.m. Monday: Russian DJ Nina Kraviz, a supporter of Vladimir Putin, won't be on stage this weekend at Detroit's Movement Festival, Metro Times reports, citing a tweet by the organizers. Critics had petitioned for her withdrawal.

"Nina Kraviz is unable to play Movement this year," the festival tweeted. "Stay tuned for updated lineup and set times."

Russia's war on Ukraine surfaces as an issue in Detroit's Movement Electronic Music Festival because a Russian DJ who has backed Vladimir Putin is on the schedule.

Four local Ukrainian-American groups this week launched a Change.org petition "asking DJ Nina Kraviz to renounce her support of Vladimir Putin and #StandWithUkraine." If she doesn't, Movement and the city should reevaluate welcoming her to the May 28-30 festival at Hart Plaza, says the statement posted by Anya Nona, 31, of Bloomfield Hills. 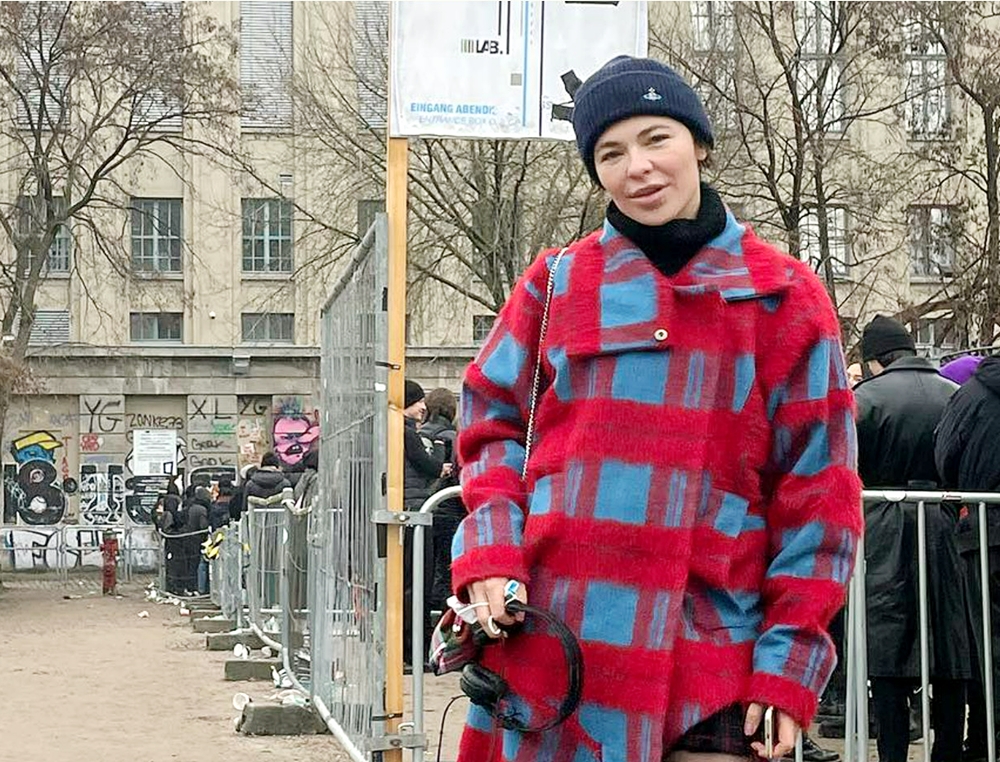 Kraviz, Russia's most famous pop musician, has performed on Coachella’s main stage and collaborated with Grimes and St. Vincent. "She has also, over the years, left a social media trail of support for Russian President Vladimir Putin," Time magazine says Wednesday.

Several prominent members of the electronic music scenes in Ukraine and Russia ... criticized Kraviz's silence and asked her publicly to clarify her ties to Putin and to refute the war.

The new Metro Detroit open letter to the 39-year-old producer, singer and DJ, who's originally from Siberia, asks her to "speak out for the victims of this war, given your platform and millions of fans." It has over 800 signatures. Excerpts:

You have spoken of the evils of racial injustice and the need to combat climate change, yet remain silent on the murder of thousands of Ukrainians carried out by your countrymen. Your vague Instagram video posted in February depicting the word "peace" ignores that Russia bears full responsibility for this war.

Metro Detroit is home to nearly 50,000 Ukrainians, many of whom have been directly impacted by Russia’s invasion: their families torn apart, loved ones murdered and hometowns destroyed. Numerous Michiganders are overseas fighting for Ukraine’s freedom. Southeastern Michigan has already taken in hundreds of Ukrainian children and families displaced by this invasion. Many of them have lost everything.

We cannot stand by while our community, Ukrainians and non-Ukrainians alike, mobilizes to help those suffering in Ukraine, yet welcomes someone whose behavior has helped enable Putin.

Kraviz reacts Wednesday in four Instagram slides that express regret over "what my country's relations with Ukraine have become." She stops shy of criticizing Putin, which could bring legal problems at home.

"I am against all forms of violence. I am praying for peace. It pains me to see innocent people die," the artist states. "I'm a musician and was never involved in supporting the politicians or political parties. ... I don't understand politics ... so I don't think it is right to talk about what is happening on social media." 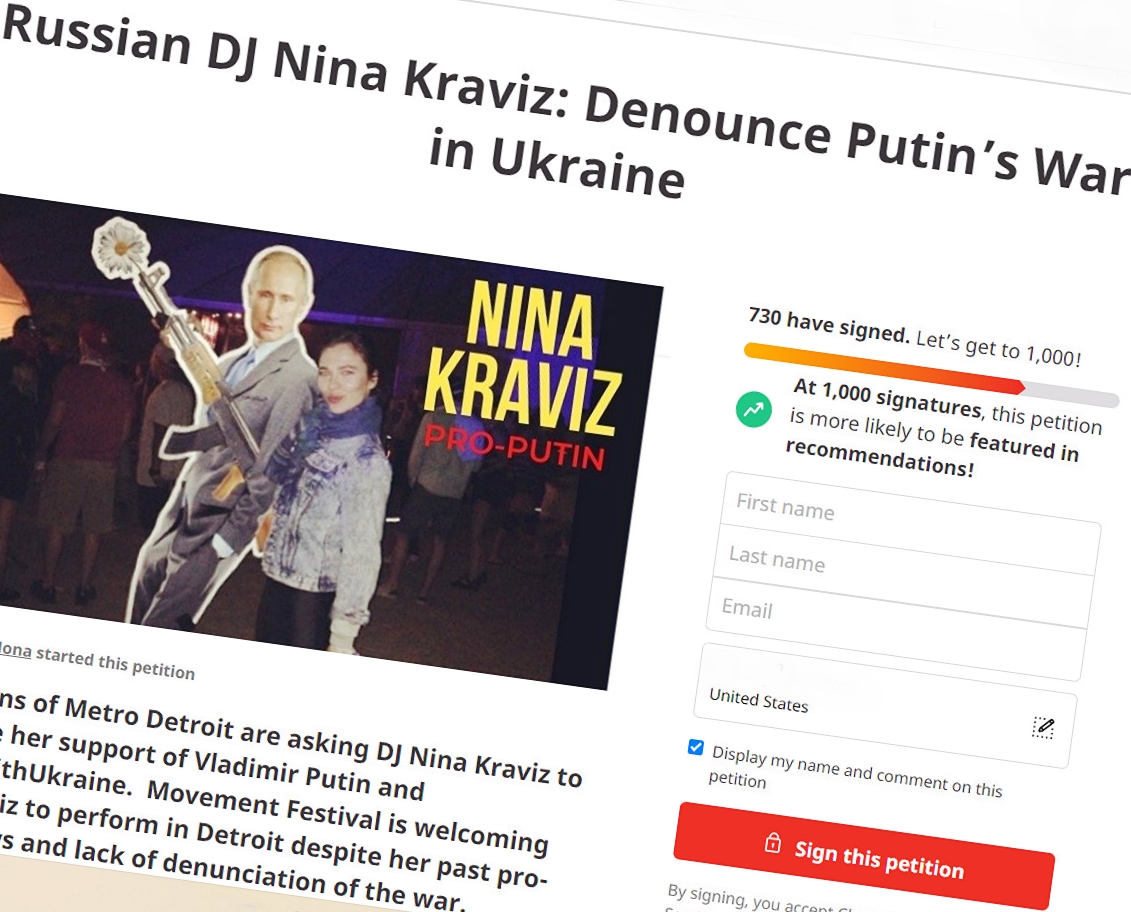 This week's appeal posted by Anya Nona of Bloomfield Hills

After the statement, the groups who sent the letter stood by their request to Movement due to Kraviz's "continued obfuscation." ...

Kraviz's past social media posts linked to Putin have been misinterpreted, representative Rosalie De Meyer [of Berlin] tells Axios in an email.

"Hopefully you see that calling her a Putin-supporter is a big stretch and incorrect," De Meyer says. "Finally, as a journalist, I'm sure you understand the potential consequences for Russians in Russia for speaking up about the war."