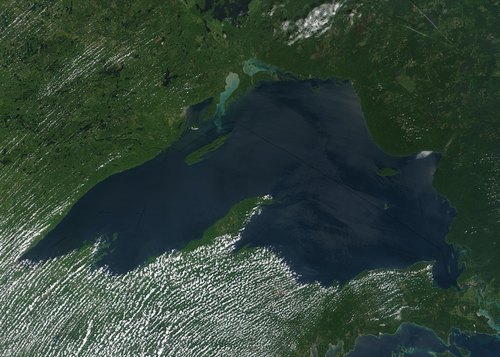 Lake Superior is the largest and deepest of the Great Lakes, and sits at a higher latitude than the others, hence the name. All of which you learned in fifth grade, most likely.

Here’s something you might not know: In 2010 Lake Superior got a Twitter account, fittingly known as @LakeSuperior. Since then, the lake’s tweets have expressed a certain attitude – lofty, confident, self-possessed, superior. Retweeting a particularly lovely photo of itself, the lake might add, “Oh my. I’m prettier than I even knew.” That kind of thing.

It took more than a decade for the lake to acquire 40,000 followers. Then came the overturning of Roe v. Wade. Lake Superior, on Twitter, today has over 200,000 followers, all as a result of one tweet:

This lake vehemently stands with women having the right to choose.

It wasn’t just the tweet, though. Lake Superior deftly, and humorously, disposed of critics who tweeted back at it, most of whom fell into the “shut up and…” camp, people who think athletes, entertainers and Great Lakes should stay in their lanes and keep their political opinions to themselves. This exchange with Tom Fitton, president of the conservative organization Judicial Watch, was typical:

Thomas, not even your first talking point is correct. Water is not wet, what water touches is wet.

I'm confident I have a lot more experience in making things wet than you do.

As one observer noted: “Lake Superior hasn’t wrecked anyone this bad since the Edmund Fitzgerald.”

Deadline Detroit reached out to “Lake Superior” via Twitter direct message. The human being who tweets as the lake is a real, verifiable person who is in no way officially connected to the state of Michigan or any other organization. We agreed to keep their identity secret, and will reveal only that it is an individual living a bit more than 600 steps from the shoreline, somewhere in the three American states and one Canadian province that border it. The lake was fashionably late for our interview, claiming it was “splish sploshing around” and would call when it could. An edited version of our conversation follows.

I have always loved Twitter. I didn’t have a super strong vision for it, but I really wanted to lean into the voice of Lake Superior and the idea that it is a lake with a superiority complex. It’s the greatest lake, a superior lake, it’s cocky. I realized I could have fun with it. It’s been a honed and crafted skill over the years.

Have you been political in this space before?

Extremely rarely. Most of the times that I have, it’s been with water policy, the environment and conservation — climate change, etc. But rarely in this context. There were two factors about the Roe v. Wade decision that made me do it: Personally, this human finds this issue to be so important it overrides the success of the account itself. And I do think there is this correlation between how we treat the environment and how we treat people. I thought I would lose followers, so I took a screenshot of how many I had at that moment: 41,880. Today it’s around 190,000. It's been wild to watch.

How long after your abortion-rights tweet did the fun start?

Pretty quickly. It was extremely hard to look away. My tweets alone had over 10 million impressions.

Were you expecting this?

Not really. It’s actually been kind of rewarding and gratifying. A lot of people, especially women, sent private messages to say thank you. And the growth (in followers) speaks for itself.

The account allows me to be freely sassy. Because it’s coming from a lake, this non-human entity, it actually lends more power to the voice, because it’s hard to fight back against a lake. On social media, one of my biggest frustrations is when we see things like, “oh, stick to sports, stick to water, stick to whatever." Nobody should have to stick to their own field.

The account was never created to burn people, and we need to return to our regularly scheduled programming. (Since creating the account) I have learned so much about the region around the entire shoreline, and about the science of the lakes. I like to elevate those voices. But it’s always been about humor. Hopefully, it raises a little bit of awareness about the environment and caring for it. So even though these last few days have been outside of that traditional message, it’s cool that I now have a bigger audience to convey that to.