U.S. House candidate Portia Roberson, a lifelong Detroiter, "has what it takes to fight for our freedoms during this challenging time," says an endorsement Wednesday by Emily's List -- an influential fundraising group based in Washington, D.C.

The first-time candidate is in a crowded primary for an open seat in the 13th District, spanning most of Detroit, Hamtramck, the Grosse Pointes and Downriver areas. Nine Democrats seek nomination Aug. 2. 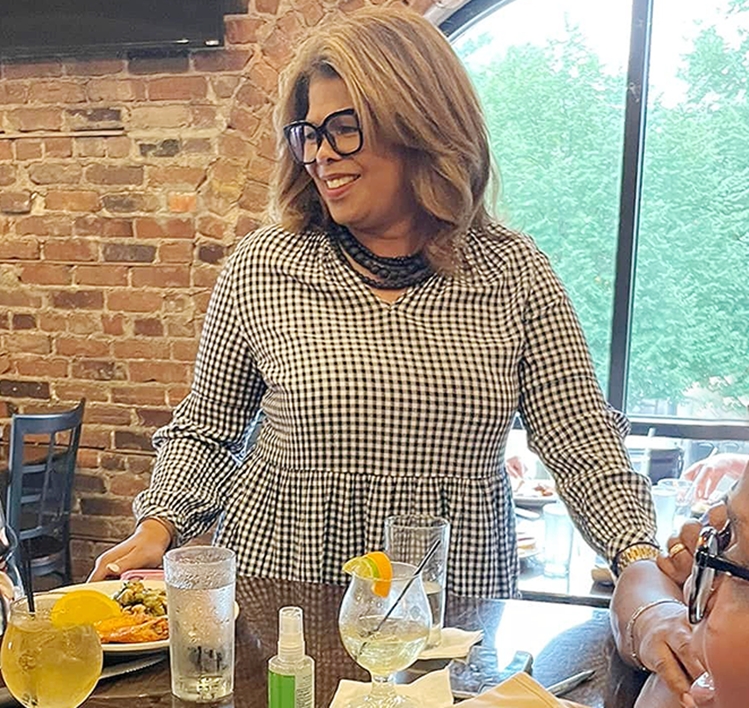 Portia Roberson at a Wyandotte event last Friday in Whiskey's on the Water. (Campaign photo)

"Roberson’s experience at the intersection of local, state and federal policy has given her the insight needed to find solutions to the real problems people are facing," says a statement from Emily's List president Laphonza Butler.

And she has been a fierce advocate in her community for children, seniors and those struggling to afford basic necessities. ...

Roberson is guided by the values her parents, a circuit court judge and a social worker, instilled in her throughout her childhood, including empathy, inclusivity and a commitment to public service.

The campaign newcomer, an attorney and past Wayne County assistant prosecutor, earlier was endorsed by the American Federation of Teachers' state union, former Detroit Mayor Dave Bing and is one of two 13th District contenders backed by the Detroit Regional Chamber, a business group that also endorses State Sen. Adam Hollier of Detroit.

Roberson is in her fourth year as chief executive of Focus:HOPE, a Detroit-based organization that provides workforce training, early learning programs and food assistance for seniors in Southeast Michigan. She also chairs the Michigan Civil Rights Commission. 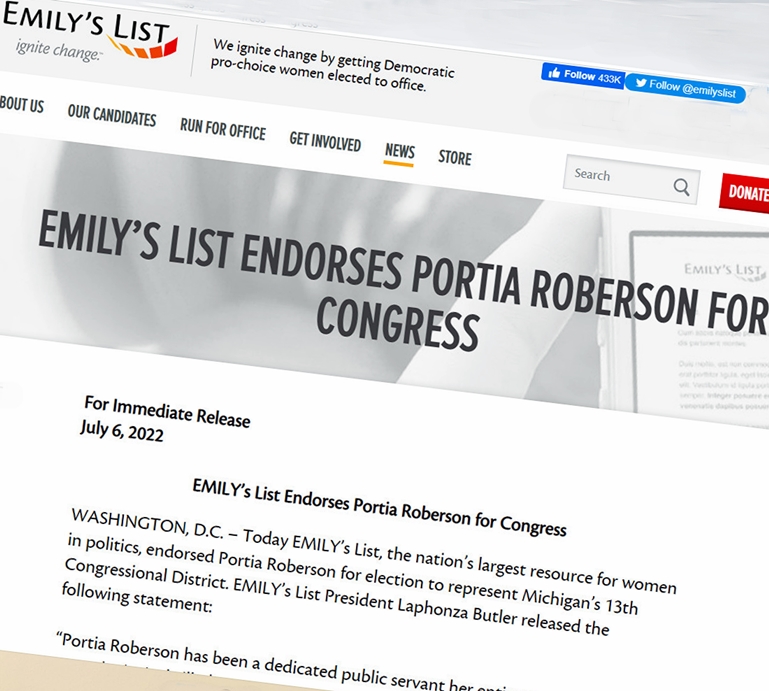 "Portia Roberson has been a dedicated public servant her entire career," the new endorsement adds. "We look forward to supporting her campaign in the coming months."

The move "could mean significant outside spending is on the way to bolster her campaign in Detroit," Washington Bureau chief Melissa Nann Burke of The Detroit News tweets.

"Sen. Hollier has been serving Detroiters and Americans as a member of the U.S. Army and U.S. Army Reserve and a member of the Michigan Legislature. His leadership on issues relating to economic development, public transit, and voting rights make him a promising choice for Congress," said Brad Williams, vice president of government relations at the chamber.

"Ms. Roberson’s federal government background will allow her to hit the ground running as soon as she arrives in Washington," said Williams. "Her experience and relationships in the public, private, and philanthropic sectors provide a skill set that would be unique to Congress and benefit all Michiganders."

The seat is open because U.S. Rep. Rashida Tlaib of Detroit opted to run nearby in the new 12th District, redrawn last year as part of a redistricting process.