Elton John has never stinted Detroit over his decades-long career, and his show at Comerica Park Monday night delivered everything his fans crave from him -- spectacle, showmanship, music, and most of all, recognition. 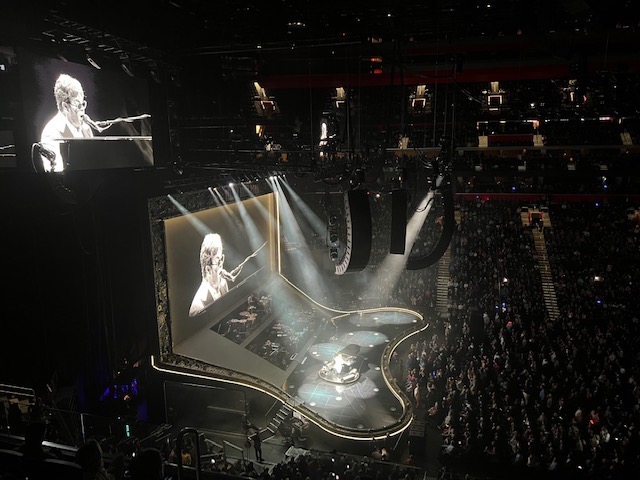 Adam Graham attended what will likely be the English pop star's final stop in Detroit, and writes:

"I want to say thank you," said John, dressed in a warm-up jacket with a blue robe over top, his third outfit of the evening and by far the most relaxed fit of the three. "Everyone who came tonight and dressed up, with the flashing glasses, all the road signs and the car signs, everything, I notice it all and it makes me feel so loved and happy. You've always made me feel happy, from the very beginning.

"So I'll never forget you," the legendary singer and Rock and Roll Hall of Famer said. "I'm going to take you in my heart and my soul."

John, now 75 and on what he says is his final tour, has played everywhere that matters in Metro Detroit:

It was his 55th overall concert in Michigan, and he gave a shout-out to the now defunct Eastown Theatre, where he started his love affair with Michigan with his first local concert in November of 1970.

Since then he's played all the biggies in town (and outlasted most of them), from Olympia Stadium to the Pontiac Silverdome to Joe Louis Arena, the Palace of Auburn Hills, Pine Knob and Little Caesars Arena. But Monday was his first show ever at Comerica Park, and it was a fitting cap to a triumphant career.

The Tigers' home field traditionally hosts a pop-music show during the All-Star break.

John's Farewell Yellow Brick Road tour has been ongoing for several years, with a long break for Covid. He played earlier this year at Little Casears Arena, but there was no shortage of demand for another stop -- the Comerica show was sold out.