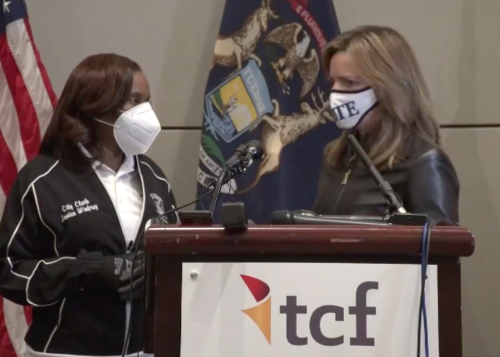 Winfrey and Benson during an address from the then-TCF Center in Nov. 2020.

It's a big primary election day in post-November 2020 Detroit, the year hordes of Trump supporters decended on the hall formerly known as Cobo, and Detroit City Clerk Janice Winfrey is pivoting accordingly.

There will be metal detectors and more cops at the central counting area today, as additional security at voting precincts, she tells Fox 2.

"We’ve hired additional police officers that’ll be down here, 20 will be in this facility. Everybody has to go through a metal detector."

Hundreds of self-described "poll challengers" attempted to force entry into the counting room at TCF following Trump's loss in 2020 as demonstrators gathered  outside chanted "Stop the Count!" A bomb threat was also called in.

Winfrey testified before a U.S. House panel last year that threats of violence against her and her staff had caused her to live in fear and that five senior employees went on leave or retired as a result.

"... they're coming to our homes, and they're making us very uncomfortable," she said. "Some of my colleagues have been shot at, simply because of what we do."