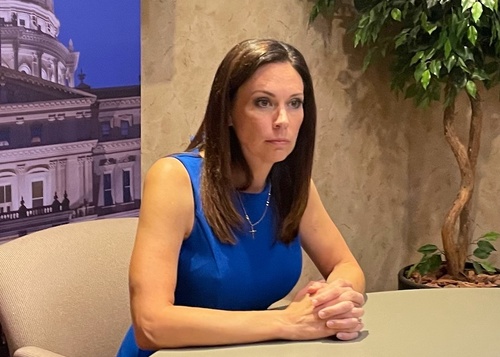 Where is Tudor Dixon?

That's the question posed by conservative Detroit News columnist Nolan Finley who, in addition to letting us know he spends each night watching Jeopardy, has not seen the Republican gubernatorial candidate introduce herself to voters with commercials. Instead, attack ads highlighting her extremist stance on abortion — recent polling shows few Michigan Republicans believe, like Dixon, that there should be no exceptions for rape or incest — dominate the breaks between trivia questions.

For Finley, Dixon has lost precious time waiting until September to start her media blitz in earnest, as her campaign says it plans.

Michigan's late primary turns the general election campaign into a sprint. There are just three months between the two elections, and Dixon has spent much of the first month only seen by voters the way Democrats want them to see her.

Still, polling shows the candidate as little as five percentage points behind Whitmer.

For now, Dixon is reportedly fundraising to prepare for the next phase.

Whitmer has enough money to spend well more than $1 million a week between now and the Nov. 8 election, thanks to her national celebrity fundraising tours.

With the cash she had on hand in the latest report, Dixon could match that spending for barely a week or so.

When voters do finally hear from her, a campaign strategist says she won't be focussed on abortion, but the economy, jobs, roads and education.